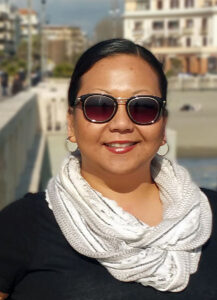 Brenna was born Yoo Ran Sung in Busan, South Korea on September 5, 1984 and adopted the USA in March of 1985, 36 years ago. It was love at first sight for her and her new family. Her home by Seattle’s Green Lake was filled with joy and discovery. She named the family dog “Bubba” and the ducks in the park were “dudge”, her first words.

Shortly she welcomed her sister, also from Korea, into the family and they stole the hearts of all around them. Always precocious, at three years old she led the pledge of allegiance for the July 4th, 1988 Naturalization Ceremony at Seattle Center.

Brenna graduated from Roosevelt High School and Washington State University – working for the Seattle Parks Department for her entire professional career. Most recently she was the coordinator of the International District/Chinatown Community Center in Seattle and referred to herself as a “lifer”. She was realizing her passion as a proud Asian American by working for underserved populations. Brenna was the 2017 National Recreation and Park Ethnic Minority Society Young Professional Recipient. Her coworkers and friends were part of her family.

She loved preparing and sharing Korean food, baking banana bread for her Pops, wearing flip-flops, had a keen mind for the practical things in life, reveled in an extensive holiday season, wielded her colorful vocabulary, delighted in Las Vegas, and loved the color purple.  Brenna was fascinated by Greek mythology, longing to visit Greece – an unfulfilled dream.

Much to her profound surprise, Brenna died in her sleep on March 23, 2021 after managing a heart condition for three years.  She left behind an array of treasured family, friends, fans, and her beloved cat Kiki.

She was unable to take along her sassy sunglasses, her nose stud, her art canvas nails, her secret tattoo, a cup of Café Du Monde chicory coffee, a diet coke, a bit of weed, a shot of Crown Royal, her car with the thump thump base, some Korean sushi, a Panda token, some Mardi Gras beads, her Seahawks gear or her brand-new refrigerator. She left her radiant smile for us.

Brenna would quote Tupac Shakur “…so no matter how hard it gets, stick your chest out, keep ya head up…. and handle it.”

She is survived by her parents Cherie and Robert, her sister Kira, and lifelong supporters Janel, Dolly and Dick Duck.

Remembrances can be made to the International District/Chinatown Community Center in Seattle through the following link: