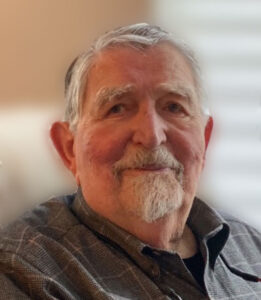 Lloyd was born May 9, 1932 in Chinook, Washington.  He was the seventh of eight children of Lester Charles and Eleda Exenia (Lindstrom) Johnson.  His parents, four brothers and three sisters predeceased him.

Lloyd graduated from Ilwaco High School in 1950, attended Olympic College in Bremerton, WA and the University of Washington.  He had just started his senior year at the UW, pursuing a degree in Chemistry, when he was drafted into the U.S. Army in November 1953.

He completed his U.S. Army basic training at Fort Ord, CA, then was trained in field artillery at Camp Chaffee, AR.  Because of his strong math background, he was trained in fire direction control.  He was sent to Germany in 1954 and stationed at Dachau.

Upon completion of his military service in November 1955, Lloyd re-enrolled at the University of Washington where he earned his Bachelor of Science degree in Chemistry in June 1957.  He worked at the Bremerton Naval Shipyard until deciding to pursue a graduate degree.  He studied Nuclear Chemistry at Washington State College while working as a lab instructor and private tutor.

It was there, in the summer of 1957, that he met a lovely co-ed on a blind date.  He stopped graduate school to earn a living that would support a family.  He worked for the U.S. Agricultural Chemistry Department and then joined the U.S. Food and Drug Administration (US FDA) in Seattle, WA as an Analytical Chemist.  He and Linda (Schultz) married in December 1959.

Lloyd was transferred to Dallas, TX in 1960.  While living in Dallas, Lloyd and Linda welcomed two daughters into the world.  In 1965, Lloyd was transferred to Atlanta, GA as a Supervisory Chemist.  In 1970, he transferred the family back to the Seattle area.  There, he completed his 35 year career with the US FDA, which he described as “always interesting and intellectually rewarding.”

After his retirement in 1994, he and Linda traveled regularly enjoying both domestic and international sights.  They were part of the team that started Creekside Covenant Church and were active in its growth.  They had enjoyed 55 years of marriage when Linda passed away from pancreatic cancer in 2015.

Lloyd was a kind, patient and wise man of great integrity.  He was an avid and talented golfer and woodworker.  He is survived by daughter Jennifer and David Shettleroe, daughter Cynthia and Kirk Schlemlein, grandson, Jacob Lloyd Shettleroe, and many beloved nieces and nephews.

Memorial donations may be made in Lloyd E. Johnson’s name to either of the following: