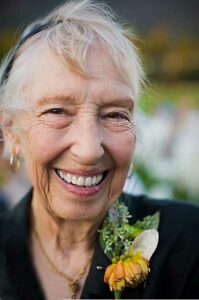 Charlotte was preceded in death by her husband of 70 years, John (known as Jack), and by her younger brother, Gerald Anthony Jr. (known as Tony). 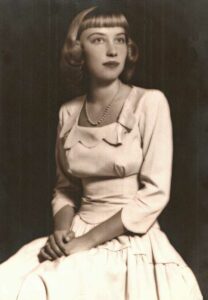 The definition of Charlotte was that she was an artist. She began doing art from a young age, and her yearbook at John Burroughs Junior High features her artwork on many pages. She attended Los Angeles High School, where she became senior class president, and UCLA, where she joined Kappa Alpha Theta sorority.

Charlotte left college before graduation when she secured a job doing art design for a downtown department store. She and Jack were married on May 20, 1949. They moved to Downey, California, and in September 1950 she gave birth to their first child, Deborah. In June 1954 their second child, Drusilla, joined the family.

Charlotte finished her bachelor’s degree in art in 1961 at Long Beach State College and began a career teaching junior high art at West Junior High in Downey, which she loved. She was also an active volunteer at St. Mark’s Episcopal Church in Downey. Besides teaching art, Charlotte created all the family Christmas cards, taught back yard art classes for the neighborhood children, and entered paintings in local art shows, as well as constantly taking up new media and artistic ideas. Later she taught art at St. Margaret’s Episcopal School in San Juan Capistrano. After teaching, she became a docent at the Los Angeles County Art Museum, which she found very challenging and stimulating.

When grandchildren came along, Charlotte was an imaginative grandmother, entertaining them with not just love but fun and make-believe. After Charlotte and Jack retired, they moved to Black Butte Ranch, Oregon, where other family lived. Charlotte became a popular artist in the area, doing commissioned artworks of people in front of their vacation homes, and painting other local scenes. They remained at Black Butte until they moved to assisted living in Bend in 2017. Charlotte moved to Bellevue, WA, near her daughter Debbie, after Jack died.

Charlotte and Jack celebrated their 70th anniversary on May 20, 2019. They had a marriage that was a model for their children and grandchildren. And, as her granddaughter Mary put it, Charlotte “had a way of always turning ordinary into magical.” That magic will be a treasured memory forever.